I’ve always been a visual person that also loves to write. When I started journalism I thought that I could combine the two and double my income per story. Sounds easy, right? Problem is that editorial and art are very siloed departments in the journalism world. Editors don’t want to step on the toes of their art director colleagues by suggesting who to hire and vise versa. I found that it’s far easier to convince editors to use photos–especially if you have a decent eye and submit a finished story that can’t be reshot.

I got my first big break doing both illustration and writing at the Chicago Tribune. I’d been writing business technology stories for the weekend business section. One day I just asked my editor if I could illustrate a story and he introduced me to the section art director. He had me overnight my portfolio to him. Although I didn’t get to illustrate my story (they used a photo), the art director did hire me for other stories.  I became a regular illustrator for Business and three other Tribune sections. I also started doing similar illustration work for the Washington Post and the Boston Globe. 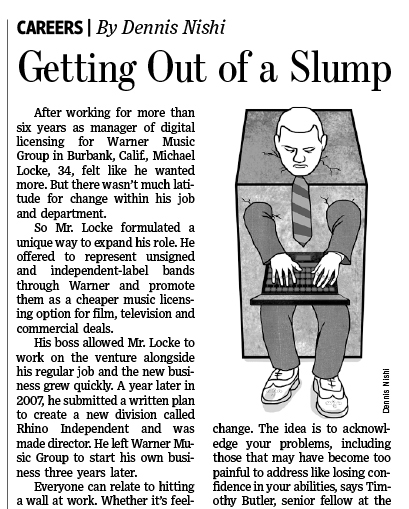 I wouldn’t illustrate my own stories until I started writing for the WSJ Sunday Journal, a syndicated weekend business page that ran in 84 partner newspapers throughout the country and was read by nearly 11 million readers. My editor loved the idea of me illustrating my stories and he got the art director on board.

My career column was only 500 words so often sat in a corner. The spot illustration was nearly as big as the entire text block. I contributed for several years, writing stories about how to network using social media and the best way to succeed your boss. My column about emotions in the workplace became one of the most well read online stories for the entire weekend. I had a good run until Sunday was retired in 2015. The paper wanted to focus on newer digital programs.

Anyways, I’ve been reading a lot of graphic novels during lockdown and have been filling out my already swelling bookshelves with work by such notable authors as Adrian Tomine, Jeff Lemir, Craig Thompson, Richard Sala, Ted McKeever, Charles Burns, Alejandro Jodorowsky, Juan Diaz Canales and Junajo Guarnido. Just to name a few!

I’ve always thought of comics as being a true auteurs platform since a creator can can truly occupy every creative role. I created many of my own comics as a kid and have watched comics evolve from chewing gum premiums into an accepted literary form. I was elated to hear that graphic novels like John Lewis’ March are now winning national book awards!

All of this great new work that I’ve been seeing has inspired me to start my own graphic novel that I’ve entitled Sage Cake. It’s a western horror epic about a pandemic that delays the Civil War. I came up with the idea long before our present day COVID existence but have worked in a few twists inspired by our current crisis.

But I’m not illustrating this book myself. After all of my blathering about wanting to do everything, I’ve decided to collaborate with a terrific illustrator named Aya Morton who is a far more skilled comic artist than I ever could be. She did the art for His Dream of the Skyland: The Walled City Trilogy and recently illustrated a graphic novel adaptation of Fitzgerald’s The Great Gatsby. What I love most about Aya’s work is how she incorporates repeating patterns that reflect period designs. It creates a compelling texture that really draws you into the panels, especially in the big spreads. The artwork for Sage Cake is still in early development as is the script but I’ll post samples once we have finalized some of the art.

I’ve included a panel sketch from an earlier unpublished collaboration that Aya and I concepted together with another writer. It’s a 1940’s murder mystery set within a Japanese-American community in San Jose, Calif. The story is fictional but draws from real historical events that take place during World War II, the Japanese-American internment and into the post-war recovery. I’m currently reworking that story which spans a three book arc. It’s a big project that requires a lot of research.

I’m finally working on a children’s picture book that I’m illustrating and my long overdue collection of essays. Friends and colleagues have hammered me for years to finish and now I’m following through with their advice. The book will include my essay about becoming a samurai horseman in a major motion picture as well as my laughable attempt to get to New Zealand as a horse archer. Yes, it’s that movie with Tom Cruise. More on that late