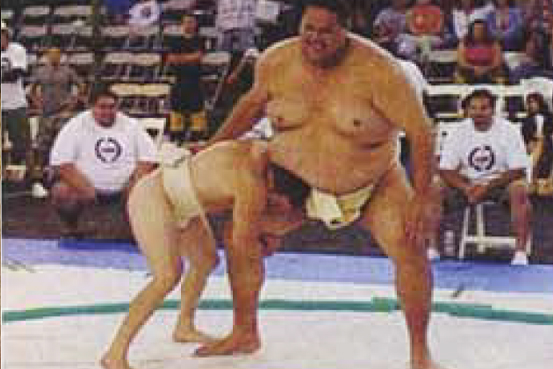 MUSCLE & FITNESS – Trent Sabo is in the moving business. He moves grand pianos, iron weights and 500-pound sumo wrestlers. And, on occasion, he himself is moved. For instance, in the summer of 2003 at the U.S. Sumo Open in Manhattan Beach, California, when the 5’8″, 185-pound American found himself standing across the ring from Akebono Taro, a 6’8″, 500-plus-pound tectonic disruption of flesh and blood, and one of the most celebrated postwar wrestlers in the sport of Sumo.

Sabo, 26, the coach and founding member of California’s Oceanside Sumo Kyokai, had been called out by Akebono and had no choice but to accept the challenge. He relished the rare opportunity to face a legend.

As he stepped into the dohyo (sumo ring) that hot August day, he snugged up his mawashi (belt), attempting to make it more difficult for the former grand master to grab. He knew he couldn’t go head to head with Akebono, so he adapted a freestyle wrestling tactic: Off the line, he deftly ducked under Akebono’s open handed swipe and latched on to his right leg with a meaty smack. Tucking his head down and shifting his weight, he tried to topple the giant, who remained as stable as a brownstone.

Sabo then felt Akebono reach down, grab his belt and tear him off his leg like a Velcro doll, then punt him into the audience. Chairs flew and topped—along with Sabo’s pride. The spectacle was meant to teach him humility; he hasn’t forgotten it yet.

Sowing Sumo Seeds
Sabo took up sumo wrestling in 2000. He saw an add for a sumo tournament in a magazine and figured, What the heck? He had wrestled in high school, tried bodybuilding and gymnastics and even had a brief stint as a mixed martial arts fighter—sumo seemed like a natural choice for him. So he signed up for the tournament’s lightweight division (up to 187 pounds) and won. Later that year he went to a national competition in New Jersey. He didn’t train, figuring his past experience would put him over the top. “My first opponent was thing gangly Canadian,” Sabo says. “I was thinking, I’m gonna make this guy’s liver bleed.” All of a sudden I’m spinning, and it was over.

It was an embarrassing defeat made doubly so by the presence of Sabo’s father, a career Marine who was a competitive athlete himself. He wrestled and boxed in the Corps but couldn’t get his mind around his son wearing a thong and smashing bellies with Japanese monsters. When Sabo told him it was white guys and women, his father became suspicious. “Is this even legit?”

Sabo had been skeptical in the beginning as well, but the sport got under his skin, and he found himself training for the North American Sumo Championship in 2001. He took second place. The following year he won his weight class. Sabo also started entering the open-class matches, because like professional sumo (all sumo practiced outside of Japan is considered amateur), it’s a one-size-fits-all competition. Despite his comparatively diminutive stature, he has ways to beat the bigger guys. “I keep moving around the ring; if I can get them to chase me or charge me, it makes it almost a guarantee that I’m going to beat them.”

But staying competitive in amateur sumo requires more than just a well-founded athletic background—it requires commitment. “It’s more time than a lot of amateurs can give,” says Andrew Freund, director of the U.S. Sumo Open, who notes that most American competitors view the sport as a hobby. European and Mongolian competitors dominate the sport because they’re paid to be athletes.

Sabo, however, is a good example of an athlete who sacrifices for his passion. A few years ago he quit his job so he could train full time for the Sumo World Cup in Rotterdam, Netherlands. He lived out of his Ford Probe for eight months, doing nothing but training and eating. “Not having to work or pay rent definitely made all the difference for me,” says Sabo, who won his weight division at the 2004 World Cup. “Mine was the second gold medal an American had won overseas. It was a tough road, though.”

These days Sabo follows a more conventional routine, through he’s still serious about winning the World Sumo Championship, the pinnacle of the amateur sumo world. He works full time as a mover and lifts five evenings a week at First Class Fitness in Oceanside with teammate Jovann Rushing. They’ve been training partners since high school and often try to match each other rep for rep in the gym.

As sumo wrestlers, they focus on developing off-the-line power. “It’s like the best of football,” Sabo says. “The first person to be pushed out of the sumo ring or to touch the floor with anything but their feet loses. That’s why football players make good sumo wrestlers.”

Where the Giant Things Are
In the summer of 2006, Sabo went to Japan to train with the masters. The trip was organized by the head of the International Sumo Federation, who arranged for him and two of his teammates to live and train in a heya, a sumo stable at Nihon University. Because Sabo was a foreigner and a sumo novice, he was treated worse than the students who have to prove their worthiness to the sport. He even got punched in the mouth for being too noisy. The discipline at the university is an extreme form of tough lough that’s inherent in the culture. “They never want you to forget that you’ve made this bad mistake,” Sabo remarks.

Although his visit was officially organized, Sabo still had to beg for matches. Most of the time, scrawny 15-year-olds were assigned to practice with him. “They were the lowest-ranked in the class. They couldn’t have been above a buck forty,” Sabo recalls. “They kept driving me out of the ring, match after match, like they’d had a bad day. It shows how much good technique makes a big difference.”

In an attempt to save face, Sabo resorted to freestyle wrestling techniques. When a student charged him, Sabo would catch him in a front headlock, forcing the student to release Sabo’s belt and work on his hands, whereupon Sabo would drag him out of the ring. The instructors just frowned. “The Japanese have real strong opinions on a lot of stuff. Stepping away from opponents and dodging and avoiding the fight is not very respectable,” he says.

While at Nihon, Sabo was fed impressive amounts of rice and noodles. Students would check their weight several times a day and take naps to keep it on. At night, the younger classmen who were confined in their dorms would ask Sabo to bring back food on his nightly sushi run. “You look at them and they’re not cut, so most people think they’re fat,” Sabo says. “They’re extremely sold. Just punch one of them and it’s like punching a brick wall.”

Onward and Upward with the Art
In March of the U.S. Sumo Open, Sabo wrestled a 420-pound heavyweight named Mark Sagato. During the match, Sabo grabbed Sagato’s midriff, slid around to his backside and pushed him out of the ring. It was a surprise to the audience that had laughed when the two seemingly mismatched opponents stepped into the dohyo.

The maneuver, called okuridashi, or push form the rear, is considered one of the most humiliating ways to lose. In Japan, such defeats were often accompanies by beatings with a cane or cigarette burns, Sabo says. In fact, Sagato’s troubles were a good example of why technique is so important, and why Sabo would like to see more bodybuilders and football players try sumo.

He believes size, power and drive give them an advantage. But he thinks it’s the diaper—the mawashi—that scares most people off. It looks like a thong made from a fire hose, which in fact it was at one time. Modern versions are made of heavyweight cotton or silk, and amateur competitors, especially women, tend to wear spandex shorts or underwear underneath, but Sabo mostly wrestles raw-dog. He says it allows the mawashi to be worn tighter. Plus, it just looks better to him, even though he says that’s not really the point. “What you wear isn’t what really matters. It’s sumo because it’s highly competitive, very intense and short. You can go out there and you can really go to war with somebody,” he explains.

Beyond the World Sumo Championships, Sabo hopes to enjoy one more glory: the Olympics. Sumo is being considered for the 2012 games in London. “Once it’s a full medaled sport, more people will take it seriously,” Sabo says. “They’ll be able to see that it’s not just two fat guys in diapers.”

Japanese officials have conceded to the International Olympic Committee requirements for weight classes and allowing women to compete. Traditionally, women weren’t even allowed to touch the dohyo because it was considered defilement, but the sport has changed a lot. Sabo says he would try out for the U.S. team, even if he had to live out of his car again. Sabo’s father, who has seen his son win internationally, now approves of the sport. “M pop has never been afraid of anything and has gotten into some hellacious fights,” Sabo says. “My brother and I are just like that. We’ve got our fathers fire. Now it’s just up to me.” 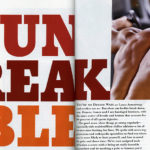 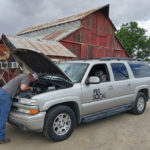 The Nonpartisan Kindness of Strangers