Of the many SoCal Connected shows that I’ve worked on, Grappling with Giants is my favorite. It’s a short doc that I produced for KCET about Jim Lowerre, a tech writer from Garden, Grove, Calif. that built an authentic sumo ring (dohyo) in his backyard. Believe me when I say that this is a rare thing since it takes a lot of work to build and maintain a regulation dohyo. Most amateur sumo wrestlers (everybody outside of Japan) practice on canvas.

I’d met Lowerre at a regional sumo tournament while working on a story for Muscle & Fitness. I was there to interview Trent Sabo, a weightlifter from Oceanside that wanted to become a pro sumo wrestler. Sabo’s Oceanside Sumo Kyokai wrestling club regularly drove 60 miles north on weekends to practice at Lowerre’s “Dohyo of Dreams” and they had interesting things to say about the dohyo and it’s owner.

A self-described sumo superfan, Lowerre has been trying to promote the sport in America for years. He built his “Dohyo of Dreams” as a destination for sumo clubs and people did indeed come. Wrestlers from all over the state have traveled to compete in Lowerre’s homegrown tournaments. The wilted lawn and ramshackle lawn sheds raise eyebrows but once bare feet touch the damp sand for the first time, wrestlers will audibly coo, says Lowerre who hand troweled special sand to create the ring and consecrated it with authentic blessings of dried squid and sake. “Most amateur sumo wrestlers have only practiced on canvas and that is a very different experience.”

Lowerre owns his own mawashi (sumo loincloth) and has competed in a number of tournaments. Unfortunately, back problems have sidelined Lowerre’s wrestling ambitions. He still wants The Dohyo of Dreams to be a regular stop for all the local clubs but interest in his tournaments has declined. “I try to put them on but fewer and fewer come every time. But I can still watch them wrestle and I’m happy with that.”

You can see Grappling with Giants here: https://www.pbs.org/video/wheres-nancy-and-the-virus-hunter-moqoom. The segment is in the last six minutes of the episode and is unlisted because it was added at the last minu 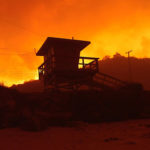