I live in Los Angeles and all of the smoke from local fires is giving me flashbacks of the Woolsey fire that raged through Southern California in 2018. I remember it vividly because I had been asked to cover the event by my executive producer at SoCal Connected who called me at 7 p.m. Her story, The New Normal, was about how overdevelopment into fire-prone areas and climate change is increasing the frequency and severity of wildfires in California.

We both donned flame-resistant turnout coats and drove down the eerily empty 101 freeway past Calabasas and through several police roadblocks. Power throughout the burn areas was turned off so we were either driving in total darkness or bathed in the intense red flare of raging fires that were burning down entire neighborhoods.

What struck me most that night were the random things that I saw burning like children’s toys and file cabinets filled with personal documents. I captured much of what I saw on video but we had a few close calls. My website header photo shows an incident that we had on Pacific Coast Highway (PCH). We were shooting a hillside that was covered with burning homes when the wind suddenly kicked up. An angry swirl of debris and fire came down the hillside at us, whipping downed power wires in big sweeping arcs.

We were fortunate to have met up with an experienced news stringer who always kept his modified Dodge Charger pointed in the right direction for quick escapes. We got out of there quickly and ended up following an engine crew that was working PCH. The overworked firefighters were doing what they could to save the many homes and businesses throughout Malibu. But it was a windy evening. You could see embers blowing over our heads and igniting everything that they came into contact with. We followed one crew to Pepperdine University which sat in a bowl surrounded by scrubby hillsides that were burning. We followed a line of parked cars burning along the edge of the campus to the library. I used a 400mm lens to get shots of students huddling since campus security had been ordered to chase away reporters. Most of the university was spared that night.

I returned to Malibu days later to shoot the scorched aftermath. Only emergency crews and press were allowed onto PCH so access to burn sites was easy. We stopped to shoot a group of local volunteers distributing food and water to local holdouts and saw a caravan of trucks hastily pull into the lot behind us. Men in turnout gear rushed out grabbing a few cases of bottled water that they threw into pickup beds that were filled with picks and shovels. We followed them to a nearby neighborhood of two-story homes that had been evacuated. The group was made up of local lifeguards and surfers that were being dispatched by an ad-hoc spotter network of locals with radios who were reporting any smoke sightings. I had to jump a few neighborhood walls with all of my camera gear to keep up with them. But I did manage to catch them putting out the remains of a fire in a backyard. After circling the property for any other flareups, the group relaxed for a a moment with a celebratory round of beer before they were called away to put out another fire.

The New Normal ended up being one of our best stories of the season and won me a Golden Mike for best videography, an L.A. Press Club award and a couple of Emmy noms. You can see The New Normal here: https://www.pbs.org/video/the-new-normal-jz1jp 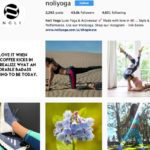 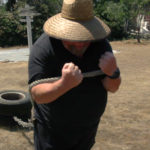 Hanging Out at the Dohyo of Dreams